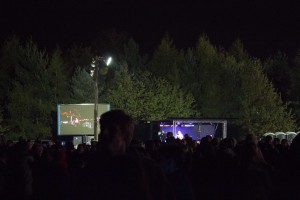 That was fun! There was I, buying tickets for my favourite fireworks event of the year – Blitz Fireworks Spooktacula at Nantwich and I noticed that they were using a video wall this year.  Having just completed a 10 second Hallowe’en short for October in Show Me the Animation’s  ‘Do it in Ten’ competition the ‘little devil’ in me said ‘Why not?’ There were, in fact, lots of reasons why not – it was the day before the event, my editor still had to finalise the sound effects, the guys from Blitz were out in the field (literally) already… but I like a challenge and have learnt that you don’t get anywhere by letting a few issues getting in your way.

Fortunately this seems to be the attitude at Blitz Fireworks too and, at the end of what must have been a long day for them, they saw my offer to provide an animation for their video wall and asked me to send it to them to see what they could do. After a very late night putting the sound together the animation whizzed its way along the ‘information highway’ (What would we do without it?) and less than 24 hours later the animation was playing on the video wall pictured above.

So a great year so far for big screen showings for Melody Smith Animation – ‘50 Kisses’ premiere in London this February and Nantwich Spooktacula with Blitz Fireworks in October!  I hope that this will be the start of a good relationship with Blitz Fireworks – who knows what we can do when we have more than 24 hours to arrange it! They have been doing the impressive Nantwich Fireworks Show for 5 years now and are currently celebrating winning the ‘British Fireworks Champion 2014’ at this year’s  competition in Plymouth. I f you get a chance to view one of their events I would definitely recommend it!

A QI moment…
And another one bites the dust…